Our knee serves as one of the most important joints in our body, giving us the ability to move around freely. However, moving around freely with significant knee pain can lead many to seek treatment options, with one of the most well-known options being a knee replacement.

The first knee replacement was created in 1968, and since that time, hundreds of thousands of Americans had the procedure done to give themselves a more comfortable life.

Unfortunately, multiple complications arose from these replacements, with thousands of users suffering from excruciating knee pain each and every day.

Over the course of time, consumers who had a knee replacement procedure done noticed issues with 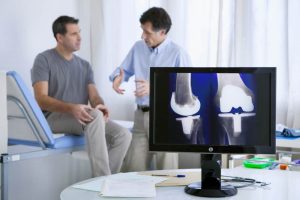 their new knees. For instance, consumers son reported that their knee replacements began to loosen over the course of time.

For many patients, this resulted in immediate pain. Research soon found that much of the pain suffered by patients was due to poor manufacturing quality. Many of the largest knee replacement manufacturers, such as DePuy® and Stryer®, built knee replacements that would loosen with time.

With patients suffering from more and more pain, suits began to be filed against knee replacement manufacturers since many of the devices would fail to attach to a patient’s bone. This in turn, led the knee replacements to be unstable for the patient. Unfortunately, the only way for many patients to regain their mobility was to have a revisional surgery to repair or even replace the loose implants.

Signs of a Failing Knee Replacement

How Do I Know if My Knee Implant is Defective?

Each and every knee implant case is unique. In many cases, the device manufacturers issues recall notices to both patients and doctors regarding their products. In other instances, a defective knee replacement device is uncovered by the FDA through their “Adverse Event Database”, where adverse medical procedures and devices are logged.

There are 4 major manufacturers of knee replacements in the United States:

It is important for consumers to note that these are not the only knee device manufacturers. Other brands of knee replacements include MicroPort Orthopedics® and Optetrak®.

It is estimated that nearly 600,000 Americans receive a knee replacement each year, with that number slowly rising to account for an aging population. It is thought that tens of thousands of patients are now suffering from defective knee replacements. If you have experienced complications after a knee replacement, let USA Consumer Network help you find justice.