*Consent: By clicking the "SUBMIT" button, I consent to receive recurring autodialed and/or pre-recorded telemarketing calls and/or text messages from USAConsumerNetwork or our partners in order to discuss my legal options and at the telephone number I provided. I also consent to the USAConsumerNetwork Privacy Policy and Terms of Use. I understand that I may receive a call even if my telephone number is listed on a Do Not Call list and that my consent is not a requirement of purchase. I understand that my telephone company may impose charges on me for these contacts and that I can revoke this consent at any time. For SMS campaigns: Text STOP to cancel and HELP for help. Msg & data rates may apply. Recurring msgs up to 27 msgs per month.

COMPENSATION MAY BE AVAILABLE

Get in contact with an attorney for a free consultation

Have a claim filed at no cost 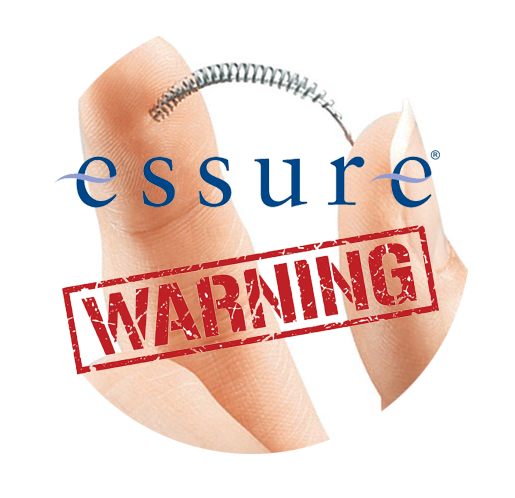 The Risks Behind Essure® Birth Control

Essure® is an irreversible and permanent birth control device for women. However, thousands of women have now come forward claiming that the device is defective.

To date, the FDA has received well over 26,000 individual reports of adverse side effects and complications from women who have used the Essure® device. Lawsuits allege that Bayer Pharmaceutical® was aware of the dangers carried by Essure®, but failed to warn doctors and healthcare professionals.

Essure® In The News

An Alameda County judge lifted a blanket protective order covering most of the 70 million pages of discovery documents. The documents include reports prepared after FDA inspections along with annual reports submitted to the agency.

Now, more than 16,000 claims have been filed against Bayer® in 2019 by women who suffered from severe abdominal damage, organ damage, device movement, and surgical removal of the device. Now, thousands of Essure® recipients are filing for compensation against Bayer®.

Death Toll and Dangerous Side Effects Rise - May 2019

The FDA stated that they have received 2,230 cases of pregnancies in women who had the Essure® device implanted. Additionally, 15 adult deaths have also been reported to the FDA.

After thousands of reports emerged of serious injuries related to Essure®, Bayer® agreed to pull the dangerous device from the market. FDA Commissioner Scott Gottlieb stated that “The device has been associated with serious risks including persistent pain, perforation of the uterus and fallopian tubes, and the migration of the coils into the pelvis or abdomen”.

Bayer Pharmaceutical® released a statement stating that they will discontinue the sale of Essure® in every country, except the United States.

The Australian Therapeutic Goods Association issued a “hazard alert” for Essure® birth control and demanded a recall of all the unused or unsold stock left on the market.

The FDA stated that they had received 14,919 reports related to Essure®. Many of these adverse events were reported to the FDA by the device’s manufacturer - Bayer®.

Responding to claims of injuries, the FDA ordered Bayer Pharmaceutical® to re-do their post-market study. The agency became suspicious of the first test results after Essure® executives stated that “less than 1% of cases report pain, bleeding, or device migration”, a statement that the FDA did not believe.

Every 5 years, the FDA requires that all devices perform a Five-year post-market study. These studies aim to evaluate the effectiveness and side effects associated with a device. An FDA advisory committee soon ruled that the Essure® device must clearly state that it is a “surgical device”. Additionally, the FDA asked that Essure® come with more thorough instructions and follow-up consultations.

Due to thousands of complaints submitted to the FDA, a discussion took place that included recommendations to avoid the dangerous side effects of Essure®. Many of the panelists involved in the FDA board blasted Essure® for their unethical safety studies. Experts state that the safety studies were not randomized, which could lead to false approval.

Please seek the advice of a medical professional before making health care decisions. This advertisement is not associated with Bayer®, Essure®, or any government agency.

ATTORNEY ADVERTISING. This Website is not intended to provide medical advice. Consult your doctor or physician before starting or stopping any medication.

Discontinuing a prescribed medication without your doctor’s advice can result in injury or death. Recoveries are not an indication of future results. Every case is evaluated on its own facts and circumstances. Valuation depends on facts, injuries, jurisdiction, venue, witnesses, parties, and testimony, among other factors. No representation is made that the quality of legal services to be performed is greater than the quality of legal services performed by other lawyers. USA Consumer Network does not itself provide legal services. Cases will be referred to third party attorneys and law firms. Do not rely on this advertisement in making any medical decision. Please call your physician before making any medical decision, including altering your use of any drug. Court costs and case expenses may be the responsibility of the client. Not available in all states. This advertisement is not intended as a testimonial, endorsement or dramatization, and does not constitute a guarantee, warranty, or prediction regarding the outcome of your legal matter, either express or implied. Anyone considering a lawyer should independently investigate the lawyers' credentials and ability, and not rely upon advertisements or self-proclaimed expertise.