If you have a home garden or work in any field related to agriculture, chances are you have been exposed to Roundup®. Roundup® is widely known to be highly toxic to humans, as the product itself contains a concentrated dose of highly toxic chemicals. So what should you do if you’ve been exposed to Roundup® and are now suffering from the side effects?

Now, more and more individuals are filing suit against Roundup® for failing to warn the public about the dangerous effects of its products.

Roundup® herbicide was originally released in 1974 and quickly rose to fame with its powerful weed-killing properties. One of the chemicals that made Roundup® highly effective against weeds and other 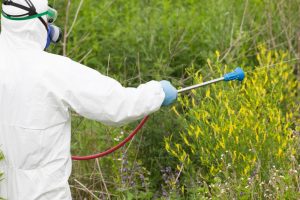 plants was glyphosate, a powerful chemical cocktail which would have adverse impacts on human health.

Roundup® is widely used in both commercial and residential applications. Monsanto®, Roundup’s® manufacturer, sells the product in multiple forms such as sprays, gels, liquids, and more.

By 2015, the International Agency for Research on Cancer, a subsidiary of the World Health Organization (WHO), has classified glyphosate as a “probable human carcinogen”, meaning that extended exposure to glyphosate may lead to cancer development.

Scientists soon began to sound the alarm on the dangers behind Roundup® and Monsanto’s® lack of transparency when it came to side effects associated with their product.

Some of the cancers associated with exposure to Roundup® include:

Find Out If You Are Eligible

Enter Your Phone Number To Start A Free Case Evaluation

After decades of use around American households and farms, many scientists have now linked the main ingredient in Roundup® - glyphosate - to multiple forms of cancer. For decades, it has been widely believed that Monsanto® knew of the dangerous effects of glyphosate but failed to warn the public and their customers of it.

Many consumers who have used Roundup® for multiple years began to develop certain cancers, such as non-Hodgkin Lymphoma and other diseases.

Roundup® and its parent company, Monsanto®, have denied claims that their product leads to cancer development and side effects in its users, contrary to the findings of the International Agency for Research on Cancer.

This, in turn, has led many Americans with advanced stages of cancer to file for compensation against the chemical giant. Now, more and more Americans are seeking compensation for damages, pain and suffering, lost wages, and medical expenses.

Some notable victories against Roundup® include:

Each year, millions of Americans are directly exposed to Roundup®, whether at work, in school, or in their own home. Although science has proven a link between glyphosate and cancer development, Monsanto® vehemently denies these scientific facts. If you have been exposed to Roundup® and have suffered any complications, USA Consumer Network can help. Let our team connect you with a team of attorneys for a free consultation here.

See If You Qualify

Let us connect you with a 100% free attorney to see if you are eligible to file for compensation.

This Website is not intended to provide medical advice. Consult your doctor or physician before starting or stopping any medication. This advertisement is not associated with RoundUp® or Monsanto®, a product manufacturing company, or any government agency.